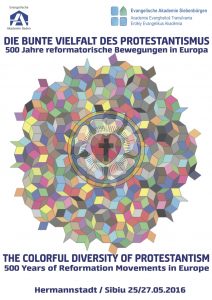 The Evangelische Akademie Baden and the Evangelische Akademie Siebenbürgen (EAS) organised in cooperation with IRCA-Europe (International Rural Churches Association Europe) the conference „THE COLOURFUL DIVERSITY OF PROTESTANTISM”. The conference was held from the 25th to the 27th of May 2016, in Sibiu, Romania and it reflected on the challenges of the different religious movements in Europe.

Hermann Witter, the director of the Evangelische Akademie Baden and the Kirchlicher Dienst auf dem Lande (KDL) welcomed the members and opened the meeting with the following appeal: as christians in Europe we need to remember about the bible as a fundament of the churches of the Reformation and also about the story of our christian faith on this continent. Witter is since 2012 the chair of the International Rural Churches Association Europe. He underlined the fact, that the look upon the past is not the only which matters. We also need to ask ourselves on how the christian faith and the western civilisation can handle the european and international crisis. Fear of the future and right-wing populism. Witter remembered that at the last conference held 4 years ago the European world seemed to be fine. In the mean time a lot go things happened worldwide and at the external borders of Europe, things which frightens and intimidates: “The worldwide crisis got closer to us and require our attitude, especially from us, christians”.

Europe changed its domestic policy. In almost all European countries we can observe nationalist and right-winged populist tendencies. These tendencies question the solidarity of the European Union and express the uncertainty of the people towards the future, so Witter. People were asking “how can a society move on, a society which is worldwide connected, which reduces ever more the production costs through rationalisation and digitisation, a society in which the only role of the human being the one of a cost factor is”. It seems like, in this new world, the vivid traditional values, as the ones we find in the majority of the rural areas of Hungary, Romania, Poland and Western Europe would not have a place anymore. Witter also mentioned the European crisis of the milk market, which shows that our farmers cannot ensure their existence with the actual producer prices. There is a “quiet death of the farms”. By this quiet fall we lose much more than just a food producing company.

The message of hope. The 500th anniversary of the Reformation was pointed out in a press release about the conference. The anniversary provides an opportunity to look back on the story of the Christian faith and its impact on life today. The press release says literally: „The Bible speaks of the benefits of faith in Jesus Christ and the freedoms and responsibilities into which we are called to grow. This message of hope is as relevant today as it was in the past, and applies equally to all people, whoever they are and wherever they live”.

Speakers at the IRCA-Europe conference held in Sibiu in May 2016 reflected on the challenges facing Europe in the sixteenth century and the ways that faith was then expressed. The impact of the religious movements was felt by those who dwelt in rural areas; the struggle for freedom led to displacement of populations which caused internal and external tensions. These issues remain relevant today. The message of the Bible also remains relevant, reminding us to use our freedom to serve one another and to find ways to live together in peace, justice and with respect for one another. This will be worked out in practice in different ways according to local contexts, but together we hold to the hope that we find in Jesus Christ.

In the parts of Europe represented at the conference, rural life is under threat today from challenges similar to those of the sixteenth century, as well as from demographic changes and lack of understanding of rural rhythms and values by policy makers. Rural areas do not enjoy the benefits of infrastructure, access to services and cultural and social benefits that are taken for granted in urban life. The conference held in Sibiu calls on politicians to take account of the needs of rural communities in their policies, and on the churches to share their message of hope and transformation. For its part, IRCA reaffirms its commitment to be a voice for the voiceless and to encourage and equip the rural church for its mission.

KEYNOTE SPEAKERS AND PRESENTATIONS of the IRCA-Europe Conference held in Sibiu from the 25th to the 27th of May 2016 (for download klick on the links below):

Summary of the conference (english):